Skip to Main Content Accessibility Feedback
Thank you for your feedback!
Sidebar 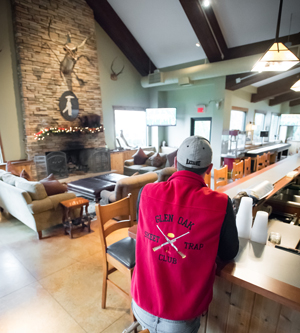 The Skeet & Trap Club has been part of Glen Oak Country Club since the 1920's and remains one of the few and finest neighborhood shooting clubs in the Chicagoland area. An active and vibrant part of the Club from November through March, it offers two Skeet fields and one trap field just steps from the Lodge. Participants include experts and novices alike, with more experienced shooters happy to introduce and teach the sport to newcomers.

Interested shooters can also compete in the Country Club Skeet League. Open to all levels of ability, the league is a great way for members to socialize with shooters from other clubs. Glen Oak is proud to hold an unbroken record of championship wins since the ’96-‘97 season.

Home to Glen Oak’s avid skeet & trap shooting team, the Lodge has a rustic cabin feel and laid back atmosphere—perfect for members to cozy up to a roaring fireplace, watch a football game with friends or play shuffle-board.